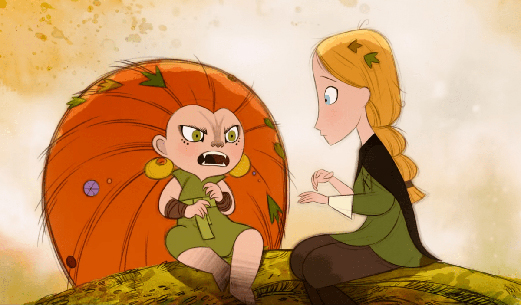 Every year (usually around August) I begin my journey to watch every Oscar-nominated film in each category. That list is usually around 24 different categories, each consisting of anywhere from three to ten nominees. This usually ends up in the neighborhood of 50-60 films in total (the same film can be nominated in numerous categories.) Usually, by this time of year, I’d be making trips to Chicago, St. Louis, Iowa City, etc. to catch some of the rarer screenings… This is of course a year like no other.

I say without reservation that if Cartoon Saloon (the production company behind this film) can continue at this level of brilliance and expand their story range I wouldn't hesitate to say they'll be capable of eclipsing Disney/Pixar sooner rather than later.

Wolfwalkers is the third and final film in their “Irish Folklore Trilogy.” The Secret of Kells (2009) and Song of the Sea (2014) are the first two films in this series; both were incredible on their own. All three carry the Irish Folklore theme and story while being brilliantly hand-animated!

In my opinion, there is nothing better than a great hand-animated film with a stellar story to go along with it. I wish that every animation studio would go back to hand-drawn, maybe with an occasional exception. There’s a reason that Disney was successful with it for as long as they have been. Unfortunately, computer animation is cheaper and requires fewer people to accomplish. I’m not trying to take anything away from computer animation. I had praised Over the Moon (a Netflix computer-animated film that is in talks for an Oscar this year) as my favorite animated film of the year until watching this. That most certainly changed, as Wolfwalkers has easily overtaken everything I've seen so far for the category.

I love the story so much, the folklore aspect added so much to the story. It felt so natural, and so powerful, yet easy to follow and simple at the same time. My daughter was hooked throughout the entire film and that's more than I can say about most modern animated films. The simplicity of the story should keep those from 8 to 80 captivated the entire film.

The story centers around a young girl named Robyn Goodfellowe and her father (the hunter voiced by Sean Bean) who journey to Ireland to wipe out the last wolf to protect a small town. When Robyn saves a wild native girl by the name of Mebh Óg MacTíre, she discovers the true magic within the woods. Mebh may be more than meets the eye and as Robyn’s friendship grows, the trouble is just beginning with the dilemma within Robyn’s heart.

I still have several more animated films to watch in this category (the nominations for this year’s Oscars aren’t until March 15) but I can't fathom any of them overtaking this film in my books. As per usual, the likes of Disney/Pixar will likely win the gold with either Soul or Onward (both great films on their own.) However, I would love to see the Academy of Motion Picture Arts and Sciences (those that hand out the Oscars) give some love to smaller studios that deserve it.