A Fun and Campy Musical 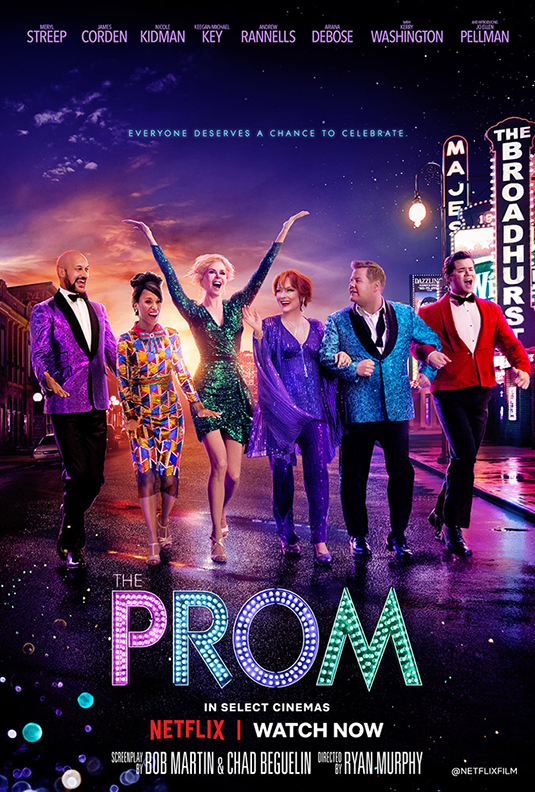 While proms across the country were canceled due to COVID-19, one prom went on and the year was better for it! The 2020 Netflix film The Prom was a home run in almost every aspect. A cast that I wouldn’t have picked but worked brilliantly together includes Meryl Streep (Out of Africa, The Devil Wears Prada), James Corden (Into the Woods, Peter Rabbit), Nicole Kidman (Moulin Rouge!, The Others), Kerry Washington (Django Unchained, Save the Last Dance), Keegan-Michael Key (Keanu, Tomorrowland) and the true star of the show was newcomer Jo Ellen Pellman.

The film centers around Pellman who plays Emma Nolan, a girl from Indiana who wants to take her girlfriend to the prom. The small town she lives in has a hard time accepting this and prevents them from attending the prom. The cast of theater stars proceeds to the town in support of Emma and her cause. From there, the rollercoaster gets going. While overall the film is mainly a comedy/musical it strays into drama territory several times throughout.

No musical would be complete without some amazing musical numbers and this is no exception. While the impact varies throughout the film, some of the numbers make this a fantastic addition to the genre. The best part is that it feels so natural, the cast isn’t full of amazing singers but they’re all able to hit the notes and make for a fun, if not imperfect musical. It grounds the musical in a real-world atmosphere.

The director, Ryan Murphy is known primarily for TV; albeit some fantastic TV! His credits include episodes of Glee, American Horror Story, Scream Queens, Pose, and Feud: Bette and Joan. He brings a sense of wonderment along with him to this film, some of his previous works stand out as being from the horror genre, however, he has such a powerful atmosphere in them that they almost transcend the genre itself. He does that with The Prom as well, the colors and lights used to bring the film to nearly a work of art in motion.

While the story isn’t the deepest it manages to keep you interested throughout thanks to the fun atmosphere and at times campy theater troupe. I urge you to go into this film expecting exactly what it is. This isn’t high art cinema, it isn’t an action-adventure film, it’s a fun and at times campy musical about an issue that continues to plague society as a whole.

I always find it amusing how the saying “life imitates art” can work so strongly in reverse when it comes to modern art such as Music, Movies, and TV. Every year I attempt to watch every Oscar-nominated film that year before the Oscar ceremony. So, to prepare, I watch a lot of films that never get nominated but every year there is a clear trend of films that touch on the present hot button topics. Whether that’s climate change, politics, wars, etc. they always seem to keep pretty current with the times.

If you like this film, I highly suggest these others that I covered in my top 10 musicals of the last 20 years. 10. Mamma Mia! 9. Into the Woods 8. Les Misérables 7. Moulin Rouge! 6. Chicago 5. Pitch Perfect 4. Sweeney Todd: The Demon Barber of Fleet Street 3. The Greatest Showman 2. Once 1. La La Land. My honorable mentions in no particular order are Dancer in the Dark, Dreamgirls, Rent, and of course The Prom.