Earwig and the Witch

by Chris Jones
Published on February 7, 2021 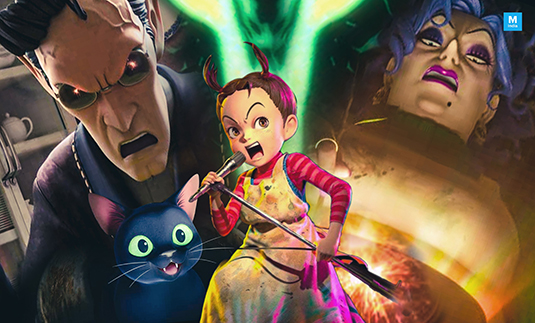 Earwig and the Witch is directed by Gorō Miyazaki, the son of legendary animator Hayao Miyazaki. This is his third film with Studio Ghibli and is the first that they’ve done with computer animation. Studio Ghibli has a nearly flawless record of making incredibly memorable animated films, rivaling Disney for their stories and creativity.

We join Earwig, the main character on her journey after being adopted by a witch. Her story lets her explore the magical world filled with mystery and intrigue. Outside of Richard E. Grant, the English voice cast is filled with relatively unknown actors. I would normally never suggest watching a foreign film with English dubbing, but animation is the rare exception. I would usually always prefer subtitles, but Studio Ghibli especially does a fantastic job with their English voice casting as well.

This film is, unfortunately, lacking in a lot of what Studio Ghibli is known for. Their films traditionally pull you in with fantastical characters and emotion that spills out of every moment. While Earwig, the main character is memorable for her character design and emotional animation, that’s sadly where the comparisons stop. The story feels generic, the emotional attachment is barely there as you don’t have a lot of time to even connect with the characters before their “adventure” begins and nearly ends just as quickly.

I can only hope that this was a one-off experiment for the studio and that they go back to what made them a powerhouse in animation for nearly 35 years. I want to stress that I don’t think this film is bad on its own, but when compared with the library of other films they’ve made, it pales in comparison.

If you want to see some amazing animation, I would suggest checking out these other Studio Ghibli films. Castle in the Sky, My Neighbor Totoro, Princess Mononoke, Spirited Away, Howl’s Moving Castle, Ponyo, The Tale of Princess Kaguya, and more.