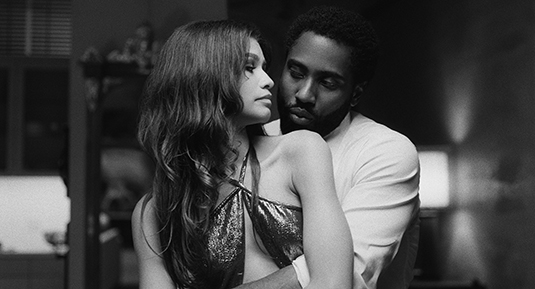 Power, intensity, and a visual feast for your mind!

Before I start, I want to mention that this is not a film for children. Please keep in mind that this is R rated for pervasive language and sexual content and it’s a hard R rating at that. With that being said, I put the rating of the film at the top for you to judge for yourself. I judge all movies the same without reference to their content rating.

A lot of modern films are just cookie-cutter copies of each other with this or that changed. This is unique and that’s an understatement. A little about the film, there are only two characters, it’s black & white, dialogue-driven, and has heavy use of jump cuts to help increase the tension and drama. Make sure that if you watch this that you do so in a dark room, the cinematography and black & white visuals are better in the dark.

The film itself is about a director named Malcolm, played by John David Washington (Tenet, BlacKkKlansman) and his girlfriend Marie played by Zendaya (Spider-Man: Homecoming, The Greatest Showman). It explores the struggles of their relationship when Washington makes it big and the aftermath that follows.

I would cautiously put this film in the category of arthouse, a film genre that covers films where the content and style, often artistic or experimental, adhere with as little compromise as possible to the filmmakers’ artistic vision. The director and writer Sam Levinson (Euphoria, Assassination Nation) can bring the most out of these characters, and with just the two of them ever on screen, that is a truly impressive feat.

Being able to control the pacing and emotions of a film through dialogue is such a rare skill; the writing of a film is so much more important than most give it credit for. This is the perfect example, though while watching, I tried to imagine how much less impactful the scenes would be if filmed like a normal movie. More importantly though, without the amazing talents of Washington and Zendaya, the dialogue would have missed the mark entirely. Zendaya especially can steal the screen with subtle facial expressions and minor twitches that could go unnoticed but truly brings the film together as a whole.

…“if you witness trauma on screen, the audience should also feel that ******* trauma” says it better than I ever could and this is one of the most powerful lines from Malcolm in the film.

As cliche as it may sound, I found myself feeling like I was on a rollercoaster from start to finish. The emotional toll this film takes on you is a large portion of where its power comes from. I do feel I must point out that this is in no way a happy love story that one should style their relationship after. It shows the true darkness that can be if two people can’t see beyond themselves in a relationship. I’m not a therapist but I do know that this attempts to glamourize something that doesn’t deserve to be. That’s not an attack on the film, just a word of warning against the content. Both Zendaya and Washington separately have extended scenes of dialogue that blew my mind.

If you liked Malcolm & Marie (rather for its style or content) I would recommend the following films. Marriage Story, Who’s Afraid of Virginia Woolf?, A Star is Born (2018), Her, Eternal Sunshine of the Spotless Mind, and Moonlight.