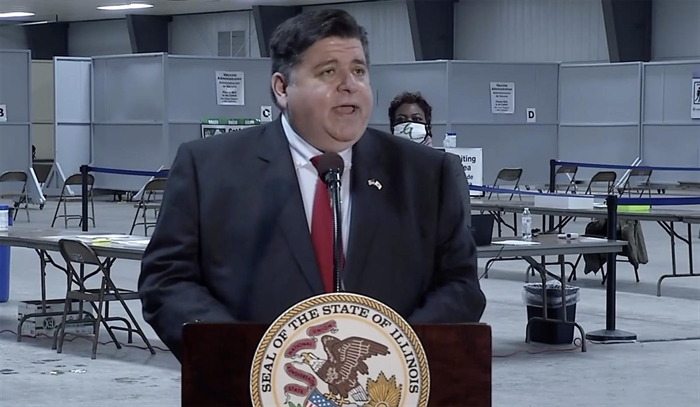 In a news conference at a mass vaccination site in Belleville Thursday, Pritzker said that the anticipated increase in deliveries and availability of doses will allow the state to reach new heights in its vaccination efforts in the coming weeks. “We have built processes and infrastructure to keep going and growing as supply increases,” Pritzker said Thursday. “And it's because of that capacity that in the month of February, we're administering among the highest number of doses per capita among the 10 most populous states in this nation.”

At the beginning of the month, Illinois had ranked as low as 47th in the country in per capita vaccines administered. As of Thursday, Illinois ranked 18th among all states with 12 percent of the state having received at least one dose of the vaccine, according to that database. Despite ongoing delays due to inclement weather, 73,091 vaccine doses were administered statewide Wednesday.

Pritzker said that vaccine delivery quantities have increased by nearly 30% in recent weeks. The governor also said he has “great hope” that a new single-dose vaccine from Johnson & Johnson will receive approval from the U.S. Food and Drug Administration on Feb. 26, making millions more doses available to states. While the increase in deliveries means the state can begin to vaccinate eligible populations more quickly, Pritzker said the state has “a long way to go.”

“That doesn't mean getting an appointment for a vaccine hasn't been a frustrating experience,” Pritzker said. “It doesn't mean that it isn't frustrating for me as governor to not have enough supply coming into the state to provide for everyone who wants to be vaccinated.”

Currently, 850 vaccination sites have opened across the state, including mass vaccination sites in all regions of the state.  Pritzker said members of the Illinois National Guard will also be deployed to sites to assist local health departments in their vaccination efforts. Under Phase 1B of the state’s vaccination plan, residents aged 65 and older and frontline essential workers are eligible to receive a vaccine. The state plans to expand Phase 1B to individuals aged 16 and older with comorbidities, disabilities, and underlying conditions by Feb. 25.

Pritzker also praised pharmacy providers for their efforts in improving vaccine administration at long-term care facilities. The doses are administered through a Pharmacy Partnership program with the federal government and Walgreens and CVS Pharmacies. A total of 226,037 doses have been administered at long term care facilities out of 445,200 doses allocated thus far.

The statewide seven-day rolling positivity rate stood at 2.7 percent Thursday, the lowest mark since June 30th. Public health officials reported 1,966 new and probable cases of COVID-19 out of 67,542 test results Tuesday. Pritzker praised Illinois residents adhering to public health guidelines, attributing the public’s diligence to attaining one of the lowest transmission rates in the country. He urged residents to receive their vaccine as soon as they are eligible in order to move forward to the next phase of reopening.

“Now we’re all back in Phase 4 which is just before the end,” Pritzker said. “Please, when it's your turn, when you can make an appointment, please get vaccinated. We need everybody to step up and do so.”

Public health officials announced 72 deaths due to COVID-19 Thursday, bringing the state’s death toll to 20,129 since the pandemic began. Illinois has recorded a total of 1.1 million cases of COVID-19 to date. An estimated 3.2 million residents are currently eligible to receive vaccines under Phase 1B. Eligible residents can search for a vaccination site closest to them and make an appointment at coronavirus.illinois.gov.