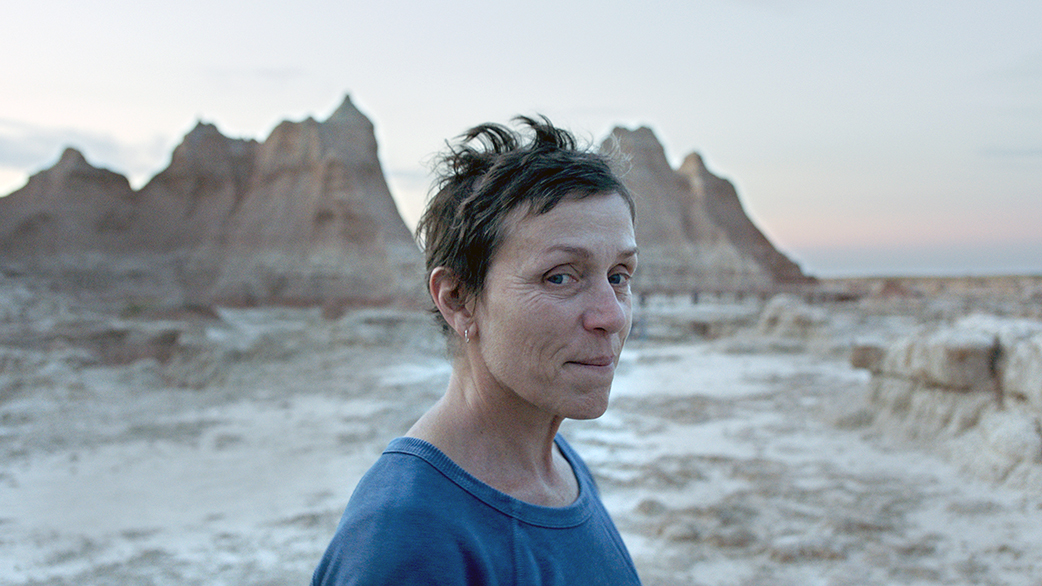 After a short break and a journey back with my last review, a multitude of new options became available. I chose this as my main review, but I will also be posting reviews to I Care a Lot, The Little Things, Judas and the Black Messiah, and many more on my Facebook and other media accounts as well.

Born in 1957 in Gibson City, IL, Frances McDormand may well be one of the truest method actors that Hollywood has ever seen. McDormand has won two Oscars, one for her portrayal of Marge Gunderson in Fargo and another for her role as Mildred in Three Billboards Outside Ebbing, Missouri. She’s been nominated and won hundreds of other awards but each one was truly deserved and I would be shocked to see her not win again for this role.

McDormand plays Fern, a woman that is on a journey through the American West. As much as the film is about her travels, it is so much deeper than that. The raw emotion and heart that she displays can only be captured by someone giving their all to a character. This isn’t one of Hollywood’s elite playing a role, it’s a human being that is stripped down to their core. Every scene, each brilliantly paced and thought out is meant to capture her journey. The actions on screen are as important as the dialogue, the beauty of the film is that it can bounce back and forth between a deep and intricate conversation between two of the characters and then immediately go for a long period with the visuals alone standing to tell the story.

Chloé Zhao directs the film in a way that doesn’t have you follow Fern on her journey, she puts you into her journey as a parallel to her. Zhao not only directed the film but also wrote the screenplay as well. There’s a curious experience that is unique to films that are written and directed by the same person. The double threat allows them to not just take someone's words and tell someone else how to act them, but it lets them show someone how to be more than just the writer's words. While this is based on a book, the screenplay stands on its own as a unique take. For a long time I had issues with giving credit to someone who wrote a screenplay and then received the accolades for the story. However, these are unique examples. Zhao took the words of the story and harnessed their power through McDormand on screen.

One of the most unique things about the film is its use of sound, while I was in school, I learned how important music and score are to a film. In this case, silence can be used just as powerful, if not even more powerfully than the music itself. This isn’t to say that the score isn’t important, but it allows for the journey itself and the natural soundtrack around the cast to truly guide the story. Rather the crackling of a fire, the intense clanging of machinery, or the sound of a van door being slammed. These help pace the film and along with a multitude of natural sounds, lets you feel like you’re truly immersed in her world on screen.

If you liked Nomadland, I would highly recommend Into the Wild, Almost Famous, Wild, Inside Llewyln Davis, and Sideways. While almost no film captures the same feel as Nomadland does, these grab the general feeling and pacing as closely as possible.