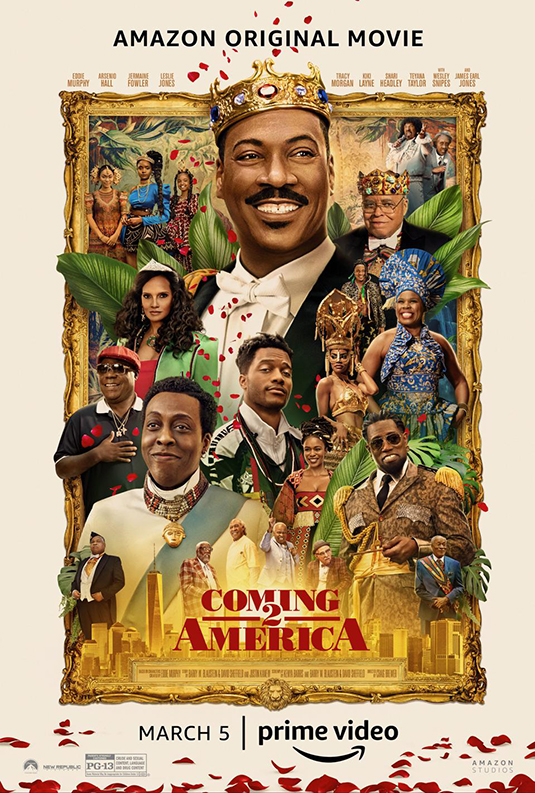 What to say about this, it’s exactly what anyone that saw 1988’s Coming to America would expect. That’s not necessarily a knock against it though. In today’s Hollywood, we don’t get a lot of original content (when it comes to bigger films, the indie film community is ripe with originality) what we do get are sequels, remakes, reboots, and continuations of older properties. This fell into the category of a sequel and a continuation of an older property.

I haven’t felt this crossed on a review in some time, that’s why I had to settle on the 2.5 out of 5 stars. On one hand, I enjoyed this and everything it had to offer. On the other hand, it was just overly predictable and over the top with nostalgia. From the standpoint of a film reviewer, I felt it only fair that I give this a middle-of-the-road rating. For someone who grew up with the original, this was ripe with moments that just had me smiling the entire way through.

I have to mention the cast, it was a star-studded event of a film. From Eddie Murphy, Arsenio Hall, James Earl Jones, Morgan Freeman, Wesley Snipes, Leslie Jones, and some amazing lesser-known actresses including KiKi Layne, Shari Headley, and Teyana Taylor all rounding out the feel-good film. (sadly, Madge Sinclair who played Queen Joffer in the original passed away after a battle with cancer in 1995.)

Eddie Murphy passed up a pitch idea from director Ryan Coogler (Black Panther) which I suspect would’ve greatly modernized the film instead of having it be packed with a lot of the same from the original. Originally the film was going to be released in theaters back in August of 2020, obviously, with COVID altering the film landscape of the last year, that didn’t happen. This led Paramount Pictures to sell the film to Amazon Studios, who scheduled it to release on March 5th of this year, however, they surprised everyone and dropped the film the night before.

I will say that I’m assuming Paramount funded this film originally with the addition of a lot of product placement. Everything from Pepsi to McDonald’s (not McDowell’s, fans of the original will get this connection.)

I don’t personally think anyone will walk away from this film feeling truly moved, some moments were somewhat emotional but as a whole, it was exactly what Murphy intended for it to be. I honestly think that the streaming release was the perfect location for this film to land. I think that it would have probably suffered pretty poorly in theaters. Its target audience is pretty minimal, as far as I know, not many were out petitioning for a sequel to the original 30+ years later.

I have to stress again, even though I’m not praising the film itself if you want to check it out, you likely won’t regret it. I reserve my 2.5-star rating for this exact type of film. By no means was this terrible (almost 2 hours) but it also will be forgotten just as quickly.

If you liked Coming 2 America I’d recommend Coming to America (this is kind of a given.) I would also recommend Borat: Cultural Learnings of America for Make Benefit Glorious Nation of Kazakhstan, Borat Subsequent Moviefilm, Black Panther, The Princess Diaries, and basically any Eddie Murphy film.