Tremont High Ahead of Curve 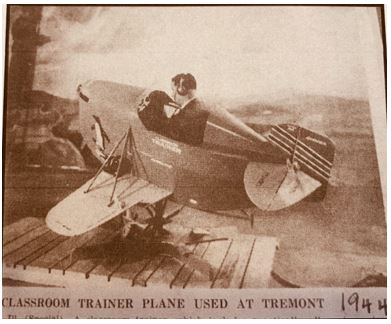 The year: 1944. WWII is still raging with no end in sight. Tremont High School has been offering a pre-flight course, and according to an article in the Pekin Daily Times, November 2, 1944, “…is now offering a new advanced pre-flight course, experimental in nature, which five students are taking. These classes are offered for credit hours. Tremont High School is the only high school to have a trainer (plane) with the exception of one in California.”

The article continues, “Robert Hendershott, John Luick, Gene Fardner, Alphie Schmied and Earl Sauder make up this new class, led by Mr. R.J. Snell, a licensed pilot instructor with both military and civilian experience. Other instructors are Mr. Wallace, who has a CAA rating as a ground instructor, and Mrs. Elizabeth Hinman, who majored in geography.

“Aided by a classroom trainer plane which includes nearly all the equipment of a real plane, the students are able to learn the feel of piloting a real plane. Included in the equipment of the trainer are a turn and bank indicator and hood so instructions can be given by microphone. Each student keeps a logbook of the number of hours he has spent ‘in the air.’ Mr. Fred Beyer has painted an artificial horizon on a large canvas.

“Two students, Robert Hendershott and Gene Gardner, took the instruction course this summer and now possess student pilot licenses. Few subjects are so universal in their application as aviation. The Tremont school board believes that almost all schools will have such training in the future…the school has also combined social studies, English, and math as well as a new class called ‘Global Geography.’ “ The article goes on to say that school officials state that they “…have faith that (the classes) will perform for us, scholastically as well as in morale building.”

The article offers yet another example of how, over the years, Tremont Schools have used “real world” applications to so often be ahead of the curve.
~ Tremont Historical Society