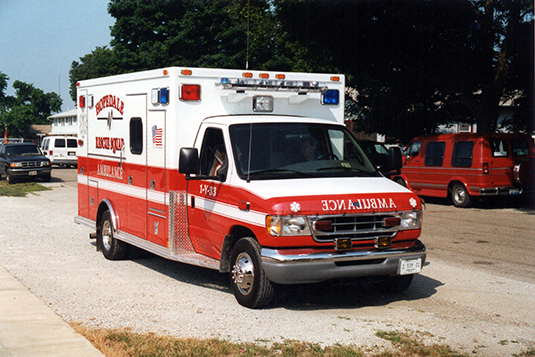 The Hopedale Rescue Squad is a volunteer rescue squad that is a part of the Hopedale Protection District. The rescue squad has 15 members, 10 of which are EMTs and five are first responders. Brian Reed is the EMS Chief in Hopedale. When asked about the squad Reed commented, “We come from all backgrounds and we kind of share the responsibilities. We are primarily a transport unit that transports to all of the local hospitals. We don’t do medical transports, but 911 type transports.” The rescue squad started in 1971, so this year the squad will be celebrating their 50 year anniversary.

The state of Illinois requires EMTs to have 60 hours of continuing education classes over a four year time frame. The Hopedale Rescue Squad hosts continuing education classes to allow their team and others in the area to complete the necessary hours. Brian Reed and Emily Smith are the lead instructors for the class. There is one two hour class each month about various topics. Emily Smith creates the presentation for the class and they will also have guest speakers present. January’s topic was on human trafficking and February’s was about anhydrous emergencies. When discussing the topics covered in class Brian Reed stated, “We may go weeks without seeing a certain type of call, so it is good to have these continuing education classes to stay up to date.” The classes are held primarily for the Hopedale Rescue Squad, but anybody around is invited. Reed also stated, “2020 really didn’t have a whole lot of hours available. So, in 2021 we have decided to open our classes up to anyone that wants to come. It has worked out pretty well.”

With the Hopedale Rescue Squad’s 50th anniversary celebration coming up, they are trying to reach out to their alumni. They are going to have open houses to celebrate and show how they run things now compared to when they were a member of the squad. Also, they are always looking for more pictures from people who have been on the squad or to hear from alumni about where they are now and what they are doing.

If you are an alumni reaching out or someone interested in the continuing education classes, you can contact the Hopedale Rescue Squad through their facebook page or email @tshog24@yahoo.com.