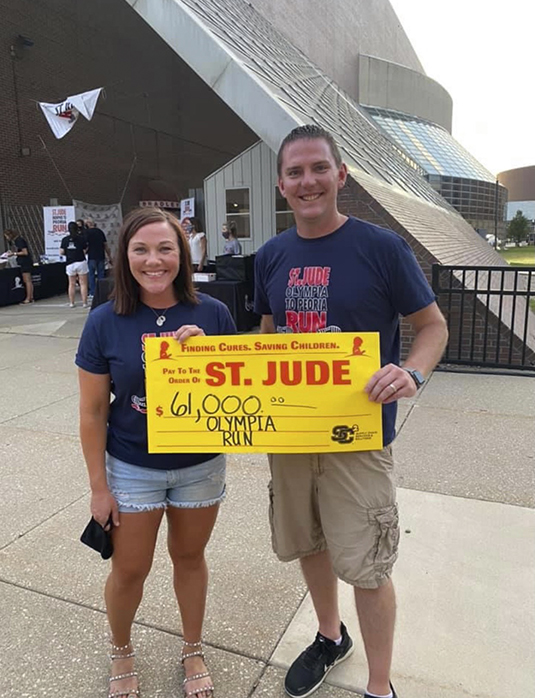 Beginning in 2020, right before the COVID pandemic hit, a group of people from the Olympia Community put together an Olympia to Peoria St. Jude Run team. St. Jude Runs are to fundraise in support of St. Jude Children’s Research Hospital. There are 37 total runs, with the main run being from Memphis to Peoria. The other 36 runs are satellite runs, which is what the Olympia to Peoria Run is.

St. Jude is a children’s hospital, research institution, and charity all in one. They treat children from all 50 states and around the world. The average cost to treat just one child with the most common form of childhood cancer (lymphoblastic leukemia) is $175,543, so every bit of fundraising helps. The treatments invented at St. Jude has helped change the overall childhood cancer survival rate from 20% to more than 80%.

Due to all the fundraising efforts that go towards St. Jude, families of patients never receive a bill for treatment, travel, housing, or food. This allows the child’s family to stay focused on their child rather than money during a health crisis. The money that the Olympia St. Jude Run Team raises goes towards paying for the bills, cutting-edge research, and cures for childhood cancer. Despite the challenges of the pandemic, the Olympia St. Jude Run team raised $61,000 in their first year last year. This was one of the highest totals for a first year team!

Since they began in 1982, St. Jude Runs have raised over $67 million. Stacey Boots stated that their team goal this year is to raise $100,000. They would also like to have 100 team members. As of March 17, they have 33 team members and have raised $15,047. The amount they have raised so far covers about 10 days of chemotherapy for one child.

The run team does not run for any specific members of the community, but for any child that is being treated by St. Jude. A lot of the team’s runners have witnessed the abilities of St. Jude. Their capabilities are “nothing short of a miracle”, according to run coordinator Stacey Boots. They know that St. Jude has the world’s best survival rates for some of the most aggressive childhood cancers. St. Jude will not stop until no child dies from cancer.

Although the Olympia run coordinators are from the Olympia area, they want everyone to know that you do not have to have live or work in the Olympia area to join the team! Runners must be 18 years old or older, but anyone between ages 16-18 are able to join as long as they are accompanied by a parent or guardian. Runners must raise a minimum of $1,000 to participate. However, there are lots of ways to support the team in raising funds!

For example, they have a big fundraising event coming up on May 15th at the Danvers Township Building. The event is “Grill Out Childhood Cancer”, and will be a drive-through dinner service with cheeseburgers, hotdogs, brats, baked beans, and chips. A meal ticket for the event will cost $10 (one ticket will cover the cost of one meal). 100% of the proceeds will go to St. Jude via the Olympia to Peoria Run Team. More information will be available soon.

The next St. Jude Run dates are July 17, 2021, and August 6, 2022. If you are interested in becoming a member of the Olympia team you can register through stjuderuns.org, then go to the Olympia satellite team’s page. You can also contact or stay informed about what the team is doing by going to their Facebook page, “St. Jude Olympia to Peoria Run”. This is a great cause they are standing for and it will be exciting to see what they accomplish throughout the rest of the year.