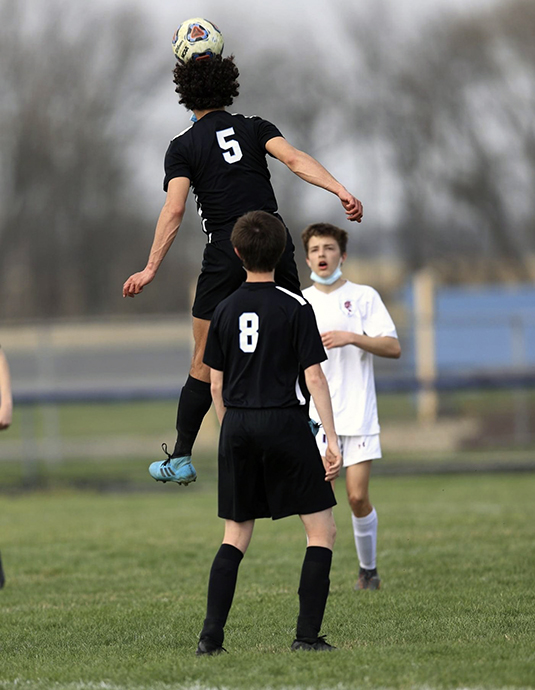 This week was an exciting week of sports for the Olympia Spartans! Boys soccer, volleyball, and football all played a thrilling week of games. On Monday, boys soccer had a rough start to the week at Central Catholic, losing 7-0. Although it was a rough start for the Spartan boys, they bounced back quickly and had strong appearances the rest of the week.

On Tuesday they defeated St. Joseph Ogden on senior night, winning 3-2. The seniors recognized were Justin Siebert, Dylan Smith, Payton Carroll, Jake Mitchell, Noah While, and Damian Bagby. It was their fourth win of the season. The varsity underclassmen were great role players, with assists from Edwin Hohulin, George Martin, and Gannon Wille during the game. Also on Tuesday, volleyball played at Central Catholic. The Spartans dominated the first set winning 25-11. Unfortunately, they ended up losing in 3 sets to the Saints.

Wednesday presented another chance for boys soccer to get a home win, but they faced a solid Pekin team and lost 5-1. The one goal from the Spartans was by Justin Siebert who completed a header pass into the goal to score.

Just like they did Monday to Tuesday, the boys soccer team had an impressive appearance after a loss to a very good team. On Thursday, they were away at Rantoul and won 7-2. Justin Siebert had 2 assists, while Jake Mitchell, Payton Carroll, Dylan Smith, and Matt Van Dyke also had assists. Back at Olympia, volleyball was home versus Tolono Unity, and lost in three sets with a heartbreaker third set loss 31-29. Kaitlin Dean broke the school record for kills during the second set of the game! The current record was 598 and Kaitlin finished the night with 609 kills.

To conclude the week football was away at Rantoul and dominated, winning 47-0! Landen Alcorn scored, Evan Rademaker had 3 touchdowns, Ethan Davis scored once, and sophomore Reygan Sitton had an 82-yard touchdown. After the game Hayden Stork stated, “It felt really good to go out there and play to our potential. We had guys in spots they haven’t played before and they stepped in and did a great job.” Hayden Stork had a well-played game, and so did Hunter Berges. Hunter had an exciting, highlight-reel diving catch from a perfect throw from quarterback Ethan Davis. The win at Rantoul moved the team to 3-1 on the season!