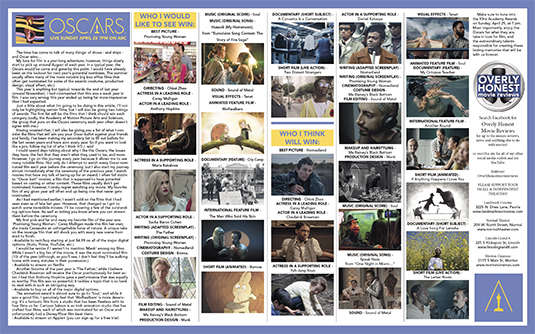 The time has come to talk of many things: of shoes - and ships - and Oscar wins…

My love for film is a year-long adventure; however, things slowly start to pick up around August of each year. In a typical year, the Oscars would’ve come and gone by this point. I would have already been on the lookout for next year’s potential nominees. The summer usually offers many of the more notable big box office films that often get nominated for some of the awards (costume, production design, visual effect, etc.)

This year is anything but typical; towards the end of last year (around November), I had commented that this was a weak year in film. I was very wrong; this year ended up being far more impressive than I had expected.

Just a little about what I’m going to be doing in this article, I’ll not only be highlighting certain films, but I will also be giving two listings of awards. The first list will be the films that I think should win each category (sadly, the Academy of Motion Picture Arts and Sciences, the group that puts on the Oscars ceremony each year often doesn’t agree with me.)

Having covered that, I will also be giving you a list of what I consider the films that will win you your Oscar ballot against your friends and family. I’ve been making my secondary list to fill out ballots for the last seven years and have won every year. So if you want to look like a pro, follow my list of who I think WILL win!

I could spend days talking about why I like the Oscars, the issues they have, the fact that they aren’t what they used to be, and more. However, I go on this journey every year because it allows me to see many notable films. Not only do I attempt to watch every Oscar-nominated film each year before the ceremony, but I also start my journey almost immediately after the ceremony of the previous year. I watch movies that have any talk of being up for an award; I often fall victim to “Oscar bait” movies, a film that is supposed to have potential based on casting or other content. These films usually don’t get nominated; however, I rarely regret watching any movie. My favorite film of any given year will often end up being one that never gets nominated.

As I had mentioned earlier, I wasn’t sold on the films that I had seen even as of late last year. However, that changed as I got to watch some incredible movies. I’ll be covering a few of the outstanding options here. As well as letting you know where you can stream them before the ceremony.

My first pick and far and away my favorite film of the year was ‘Promising Young Woman.’ Carey Mulligan made this film her own; she made Cassandra an unforgettable force of nature. A unique take on the revenge film that will shock you with every new scene from start to finish.
- Available to rent/buy starting at just $4.99 on all of the major digital options. (Vudu, Prime, YouTube, etc.)

I would be remiss if I weren’t to mention ‘Mank’ among my films. While I wasn’t a big fan of the movie, it was the most nominated film (10) of the year (although, as you’ll see, I don’t feel they’ll be walking home with many statutes in their possession.)
- Available to stream on Netflix

Another favorite of the past year is ‘The Father,’ while I believe Chadwick Boseman will receive the Oscar posthumously for best actor. I feel that Anthony Hopkins gave a performance that was equally as worthy. This film was so powerful; it tackles a topic that is so hard to deal with in such an intriguing way.
- Available to buy on all of the major digital options.

The animation award is almost sure to go to ‘Soul,’ and while it was a good film, I genuinely feel that ‘Wolfwalkers’ is more deserving. It’s a fantastic film from a studio that has been flawless with its four films so far. Cartoon Saloon is an Irish animation studio that has crafted four films, each of which was nominated for an Oscar and unfortunately had a Disney/Pixar film beat them.
- Available to stream on Apple+ (you can sign up for a free trial)