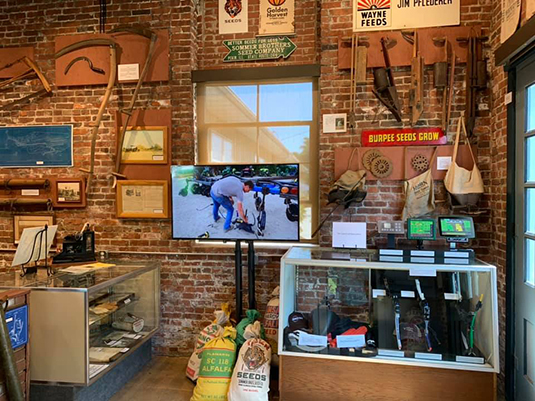 The Tremont Museum and Historical Society started in 1985 as a way to gather the history of the town. It is a non-profit organization that has had two presidents since it began. Jan Lee was the president for 30 years until Richard Sauder took over about 6 years ago. Tremont has both a historical museum building and an agricultural history museum building. Tremont was set up as an agriculture town, so there is a lot of agriculture history for the area. In the regular history museum, you can find artifacts from someone very famous. Abraham Lincoln came to Tremont during his time working as a lawyer. During Lincoln’s time frame, Tremont was the Tazewell county seat, so he would argue cases at the courthouse that was in the town. The museum is very nice with clean, well put together displays. The people who keep the museum as nice as ever are all volunteers. Lori Fuoss, secretary for the Tremont Museum and Historical Society, proclaimed that they have a great group of volunteers to help take care of the museum.

When the museum was first going through the early stages of becoming a reality, they were offered a piece of property owned by the village to use. In 2004, they built an addition to the building. The regular museum is filled with belongings from many people in the area dating back to the 1830s. In 2019 the village gave the museum an old, early 1900s brick building that was used as a fire station and for the water department. After that, it was then used as an area for city gatherings and storage. Finally, the brick building was turned into the Tremont Agricultural Heritage Museum. It needed some serious renovation, and the volunteers were there to help. They did every part of the remodel except for the concrete floors and new window blinds.

Fuoss would want anyone considering visiting the museum to know, “It is well worth it! You will learn things you didn’t know and will be amazed by some of the things you will see. There is a lot of history here.” The museum has all sorts of special displays. They had one for vintage hats set up in vignettes such as shopping in the city or a New Year’s Eve party. They have also shown wedding dresses throughout the ages, and many more.