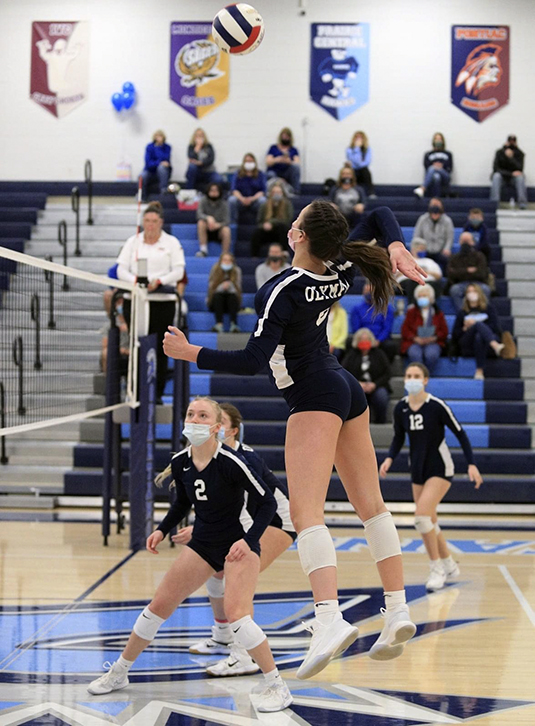 It’s time for another transition of sports seasons during this unusual school year. This week the sports that typically run in the fall season wrapped up their season, and one of the spring sports had their first competition.

Beginning the week on Monday, volleyball faced Central Catholic at home. The Spartans pulled out the win in three hard fought sets against the Saints. Senior Abbi Bode stated after the game, “It feels good to overcome the challenges we have been working through this season. It is always good to win against a rival school.” The set scores were: Olympia 24, 25, 25 and Central Catholic 26, 12, 22.

On Tuesday volleyball was away at St. Joseph Ogden and lost in two sets. They had lost to St. Joseph Ogden earlier in the season and weren’t able to defeat the strong St. Joe team in their second matchup. Also on Tuesday, both the boys and girls track teams were scheduled to have their first meet of the season at home versus Lincoln and U-High. However, it was cancelled due to the snowy and cold weather conditions.

Thursday the volleyball team played another strong team, with the Illinois Valley Central Ghosts travelling to Olympia for the competition. It was the last home game of the season for the volleyball team, and they lost again in two sets.

On Friday, the track teams were able to have their first meet at home. The Spartans faced Normal Community, Lincoln, and UHigh at the competition. Two highlights from the meet were that senior Illinois State Cross Country and Track commit Charlie Kistner won the mile, and senior Lee University Lacrosse commit Lauren Aldridge won discus, throwing 99 feet. Kistner stated, “We had a good start to the season. Everyone is happy to get back on the track after last year’s abrupt ending to the season.”

Volleyball and football played the final games of their seasons on Saturday. Volleyball was away at Williamsville for a varsity only match, and football was away at Pontiac. It has been an exciting season for all of the sports traditionally played in the fall, and it will be exciting to watch the spring sports teams coming back after a year where their seasons were taken away from them.