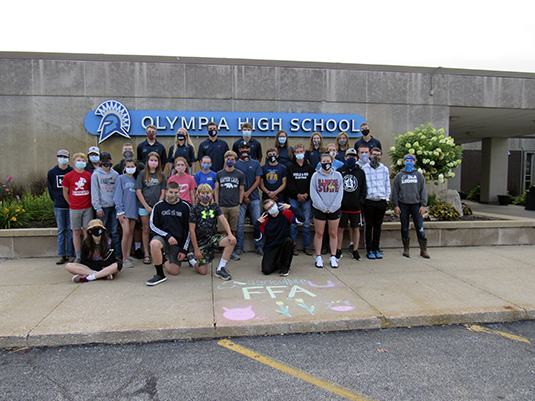 Olympia FFA has been a FFA chapter since 1972, the same year that the area high schools consolidated. However, most of the individual high schools had their own FFA chapter. This year Olympia has 114 members, including 9 students on the officer team. The 9 officers for the 2020-2021 school year are: President- Tyler Miller, Vice Presidents- Chloe Scroggins, Adam Swartzendruber, and Kailey Little, Secretary- Kari Simpson, Reporter- Tarah Hilt, Treasurer- Noah Reber, Sentinel- Ethan Davis, and Historian- Brooke Rogers. The Olympia FFA Chapter installed next year’s officers a few weeks ago at their end of the year banquet on April 18th. However, the year is not over for this year’s FFA members because spring is their busiest season of events.

On Thursday, April 29th, Olympia’s Ag Science classes experienced hands-on how to prepare a chicken directly after they have been killed. The students defeathered and cleaned-out the chickens and took home one for their families to cook. The Ag Science class has been raising the chickens for 6 weeks, while conducting an experiment with the feed they were giving the chickens. They will use a recently donated chicken coop to continue to raise the laying hens they have been caring for.

The two other major events for the FFA Chapter that are happening in the next two weeks are the annual plant sale and Ag Day with the Olympia district elementary students. All of the ag classes this semester have contributed towards preparing for this year’s plant sale. Bryce Hoffman is the advisor for the FFA chapter and the agriculture teacher at Olympia. While discussing this year’s plant sale he stated, “I am really proud that our plant sale looks as good as it always has. I am especially proud because of the contribution from each of my classes.” The Ag Day event will be brought to each elementary school this year because of COVID restrictions. Mr. Hoffman and the officer team have been working hard to plan the unusual ag day, but they are feeling confident it will be a success like usual.