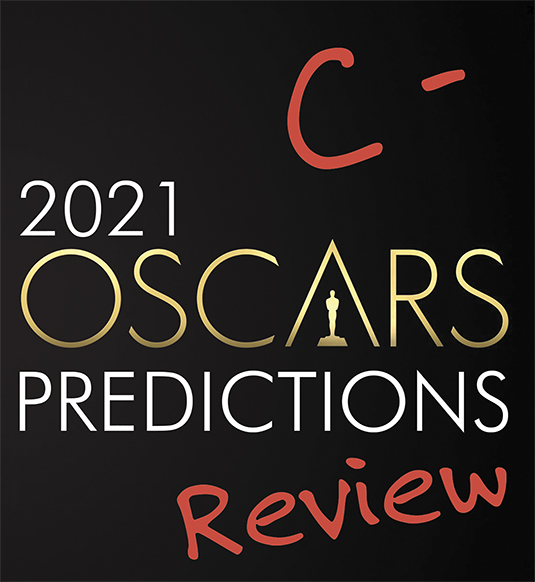 So I was never a straight-A student, but a C minus isn’t precisely what I was hoping for either! I hope that if any of you took my advice on my Oscar picks this year, that whomever you were going up against picked worse than I did! In an average year, I’ll miss anywhere from three to five categories because flukes just happen. This year I picked wrong in seven categories, the worst for me in the last eight years.

For Actress, I picked Carey Mulligan, but Frances McDormand won.

I disagree with this pick entirely; while I enjoyed ‘Nomadland’ more than I thought I would, I feel that Carey Mulligan gave the most fantastic performance of her career.

For Actor, I picked Chadwick Boseman, but Anthony Hopkins won.

So in my heart, I wanted Hopkins to win, ‘The Father’ is one of the best films I’ve seen in years. Hopkins’ performance was indeed a performance for the ages. I understood and appreciated Boseman being the favorite, though. I feel that the Oscars need to award the best performance instead of handing out unofficial honorary awards. So, in the end, my guy still won.

Fun Fact, Ahmed, Boseman, and Yeun share the commonality of being first-timers and represent the most diverse group in the history of this category. Boseman was only the fourth Black man to vie for this award over the last decade. After Ben Kingsley, Ahmed is only the second actor of South Asian descent ever recognized here, while Yeun is the first East Asian nominee.

For Adapted Screenplay, I picked ‘Nomadland,’ but ‘The Father’ won.

While I picked ‘Nomadland, this is another case of being happy about losing. I thought ‘The Father’ offered such a unique take on its subject.

Fun Fact, any film that is a sequel, such as this year’s “Borat Subsequent Moviefilm’ will automatically be an “adapted” screenplay as they consider it an automatic adaptation of the original film.

For Cinematography, I picked ‘Nomadland,’ but ‘Mank’ won.

I always thought it was odd that ‘Nomadland’ was the favorite; that didn’t stop me from picking it, but I feel that even though it was a beautifully shot film, it benefited too much from it because they shot it at “twilight.”

For Best Song, I picked ‘Speak Now’ (from ‘One Night in Miami’) but ‘Fight for You’ (from ‘Judas and the Black Messiah’) won.

This pick was indeed a win/win; I’ve never been a big fan of the rules for the song category. I don’t think a song that starts with the credits should be considered part of the film.

Fun Fact, a song has to be written for the film as an original song. So a lot of modern film adaptations of musicals will usually create new songs precisely to aim for this award.

For Documentary Short, I picked ‘A Song for Latasha,’ but ‘Collete’ won.

Honestly, this was the biggest shock of the night for me. I probably would’ve bet money that ‘A Song for Latasha’ was going to win.

Fun Fact, The film must run daily for seven days, open to the public for paid admission, and must be advertised in one of the city's circulars during its run, with screening times included. Additionally, the film must show at least once every day of its qualifying run.

This one also shocked me; I was thrilled to see ‘Two Distant Strangers’ win; it was one of my favorite films of the year. However, I thought for sure that the addition of Oscar Isaac being in ‘The Letter Room’ and the fact that it was nearly a lock made it the hands-down favorite.

Fun Fact, Kobe Bryant was the first NBA player to ever win an Oscar for the 2018 short film ‘Dear Basketball’ this year, Kevin Durant and Mike Conley won for their involvement in ‘Two Distant Strangers’

Search Facebook for Overly Honest Movie Reviews for up to the minute reviews, news, and anything else to do with movies!

Or visit this site for all of my other social media outlets and my YouTube: linktr.ee/Overlyhonestmoviereviews