The Mitchells vs. the Machines 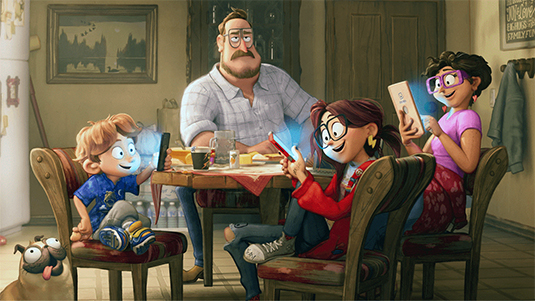 The Mitchells vs. the Machines – 2021 (Animation, Adventure, Comedy)

So in my recent memory, there haven’t been many animations that blew my mind. Last year, my favorite was ‘Wolfwalkers’ by a long stretch. This year I may have already found the one. This film had such heart and emotion it truly touched me.

The film was initially supposed to be released by Sony, but Netflix snagged it up thanks to the pandemic. That worked out well for me, I don’t know if I would’ve been drawn into a theater to see it, but I’m so glad that I could see it. Netflix had it run for a short time in theaters, so it should be eligible for next year’s Oscars (although that’s a long wait from now.) I’m also sure Disney/Pixar will release something that will likely buy them the award again.

A fun voice cast helped with Abbi Jacobson, Danny McBride, Maya Rudolph, and possibly one of the best surprise roles of Olivia Coleman’s career. The magic wasn’t just from the voice acting though, the writing was brilliant, and the animation itself was a beautiful CGI (computer-generated images). Usually, I’m a little hesitant with straight CGI as I think it takes the warmth from a film. However, this film was most definitely the exception to the rule; I felt I was watching a classic animation instead of a new CGI. I liked last year’s ‘Over the Moon,’ but it also lacked this warmth.

While many people tend to overlook animation, primarily since it’s targeted to children directly, there are so many notable films that get lost in the shuffle. I could be hungry for some great animation after I considered last year a lesser batch of movies, but either way, there was something unique and special about this.
The energy level of animation is so important, not that downtime is wrong, but it’s easier to lose interest than a live-action film. That’s why Disney/Pixar (despite my misgivings about them having a monopoly on the genre) know what they’re doing and do it well. If a film can keep your attention throughout, it’s instantly more likely to be well received. This film is for kids; there are many references to memes, youtube, emojis, etc. However, it’s not to the point where adults feel lost in it. I like to consider myself technologically competent, but even if I weren’t, I would still be able to appreciate the humor.

The best part is that they were able to nail the family dynamic in the film; if you have children, there are so many moments in this that you will instantly connect with from the character’s perspective. From the use of cell phones, social media, and technology in general to their personalities (or lack thereof.)

I intentionally avoid reading other reviews until after I’ve written mine. I prefer watching movies without anything impacting my judgment.  I can’t prevent this 100%, but I do my best to avoid trailers as well. I choose instead to go into a film blind with maybe a vague understanding of who is in it and who directed it. Too many movies have been ruined for me in the past by watching trailers or reading other reviews. That’s why I don’t give away a lot in my reviews. I want people to read them and know that I won’t be ruining their experience. I go into detail on my thoughts and if I enjoyed the experience. There are plenty of other reviewers that will give you a shot for shot breakdowns of the film.

If you want a great family film to sit back and enjoy, I can’t recommend this enough for everyone from 8-80!