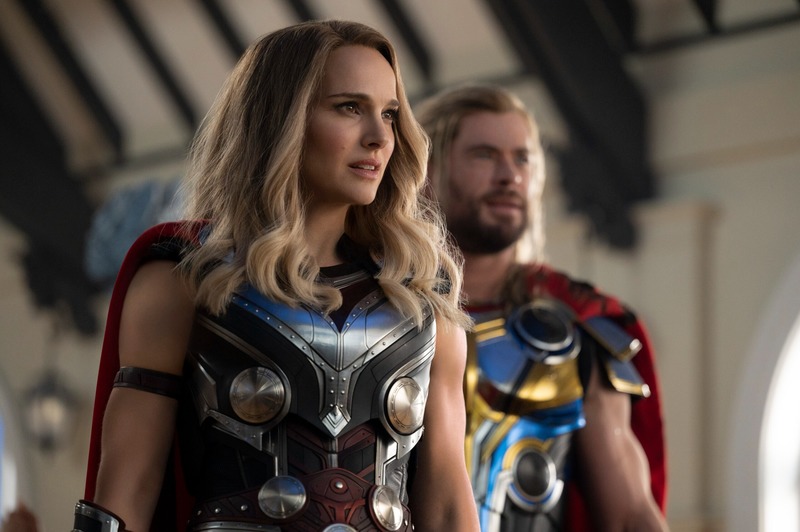 This is the 29th film in the Marvel Cinematic Universe (MCU), and we just finished up the sixth TV series on Disney+. I’m almost on board with those saying we suffer from MCU fatigue. However, I’m not quite there. Where to start, I have so many things on my mind, and even after waiting nearly a week to write this, I still don’t have it all figured out.

While I would say this falls closer to the bottom of the MCU, I still enjoyed it. Part of that is that Taika Waititi (WHAT WE DO IN THE SHADOWS, JOJO RABBIT) is probably one of my favorite directors. He has a unique touch in comedy, and THOR: RAGNAROK proved to revitalize what was perhaps my least favorite MCU character then. Sadly, lightning (or, in this case, thunder) didn’t strike twice.

Something about the film seemed off, and it almost felt as though everyone was trying a bit too hard and, in turn, made the film awkward. Christian Bale is probably the only exception as the main villain Gorr the God Butcher. Unfortunately, the MCU has a villain problem, and I don’t see it getting any better after this. Russell Crowe countered this as Zeus, who I could’ve honestly done without; his character did absolutely nothing for me and felt more like a build-up for the future than anything.

Unfortunately, I wasn’t impressed with Natalie Portman’s long-awaited return to the MCU. She’s a brilliant actor, but this role was too much and felt out of place the entire time. I will also say that a trigger warning should be addressed before the film. While I don’t want to ruin it, I would advise you to do some minor googling about what happens with her character in the movie and the battle she’s going through. If you’re familiar with the comics, then you likely already know.

One of my favorite aspects of the film is Chris Hemsworth’s real-life daughter India Rose who plays a small but increasingly important role in the movie. I don’t want to spoil anything, and I wouldn't advise googling her if you don’t want to spoil anything. I think her role was pivotal while also barely being in the film. Tessa Thompson as King Valkyrie was also a fantastic role, although I wish they hadn’t reduced some of the plot points they were going for. Hemsworth performed on par with his character, which is assumed at this point, although I feel they’re making him “dumber” as the films go on, which I’m not sure what I think about that progression.

The film as a whole had some exciting moments but, at the same time, felt like one of the most standalone MCU films to date. That alone isn’t really a terrible thing, but at the same time, the MCU's current status (Phase 4) feels more separated than ever before, and I hope I’m proven wrong soon, but I just don’t see the path as I have in the past. It feels like they’re making it up as they go this time.

These are the future MCU films that have release dates:

As of now, this is the only MCU Disney+ series with a confirmed date, but I’m sure more are to follow: