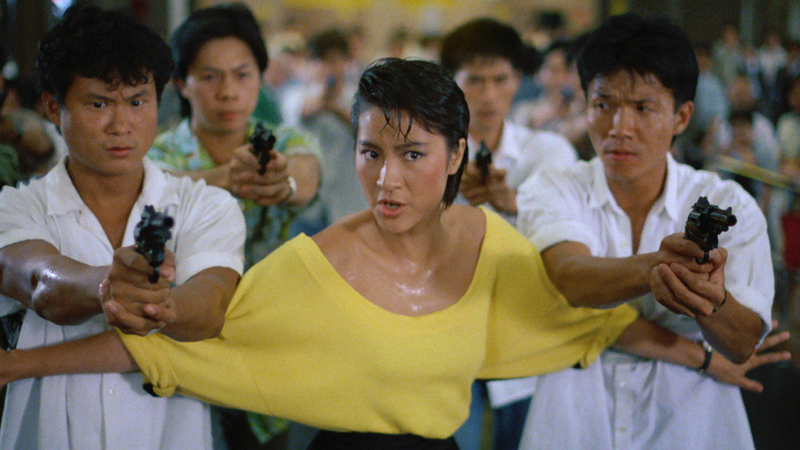 RAVING REVIEW: This wasn’t what I expected, which doesn’t speak positively or negatively against the film. It’s just another example of why you shouldn't assume you know what something will be until you watch it. Never judge a book or movie by its cover; you’ll often be misguided. Packed with a ton of extras in this special edition.

YES, MADAM is a Hong Kong action film directed by Corey Yuen and starring Cynthia Rothrock and Michelle Yeoh as two police officers who team up to take down a dangerous crime syndicate. The film has also been called POLICE ASSASINS AND IN THE LINE OF DUTY in other previous releases.

The film opens with Inspector Carrie Morris (Cynthia Rothrock) arriving in Hong Kong to take on a new assignment. She is immediately confronted with a difficult and dangerous case involving a group of ruthless criminals terrorizing the city. With the help of her colleague, Inspector NG (Michelle Yeoh), Carrie sets out to take down the crime syndicate and bring its members to justice.

One of the standout features of YES, MADAM is its impressive action choreography, which is over-the-top but fun simultaneously. The fight scenes are fast-paced and intense, and both Rothrock and Yeoh deliver impressive performances as they take on hordes of attackers with a combination of martial arts skills and weapons. The film also features several impressive stunt sequences, including a high-speed chase through the streets of Hong Kong and a climactic showdown. Some of the car scenes were flat fun; it’s amazing how well-timed the different aspects of the film were.

In addition to its action scenes, the also boasts a strong cast of supporting characters, many of which add to the overall iconic feel of the movie. The film also has a solid plot, with several twists and turns that keep the viewer engaged.

Overall, YES, MADAM is a thrilling and entertaining action film that will appeal to fans of the genre. Its impressive action choreography, strong performances, and engaging plot make it a must-see for anyone who loves a good martial arts/action movie.